(Featured prices are per guest based on double occupancy, Veranda Suite, and are inclusive of Cruise Fare, Taxes, Fees and Port Expenses. November 6, 2022 departure date.)

Savings: Guests must pay in full by June 1, 2022 to receive a 10% discount, which will only apply to the gross cruise-only base fare and Taxes, Fees or Port Expenses (TF&PE) 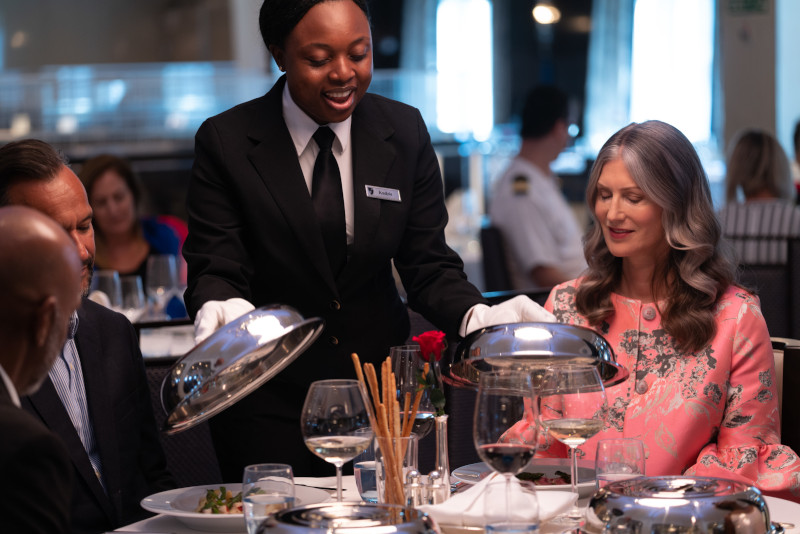 Photo: Dinner service at the restaurant

We communicate differently because we are different. Our intimate shipboard experience feels like a private gathering. We sail the youngest, most modern fleet on the water, providing more space per guest than virtually any other line. All suites are ocean-front suites with inspiring views, living and dining spaces. We take our guests to places that forever change the way they see the world. All with service so personalized, it’s like they’re staying with friends. Because they are.

It's all about the moments. A Seabourn voyage gives guests the opportunity to experience life fully in every moment, and the team does everything imaginable to make that possible. A warm smile and glass of champagne welcome you aboard. Milk and fresh-baked cookies appear at night, to ensure the sweetest dreams. A Pure Pampering℠ bubble bath may be waiting after a day’s adventures. With uncanny intuition about what might delight a guest, our team members personalize the experience in every way, and respond thoughtfully to every request. They deliver what we call Seabourn Moments™. 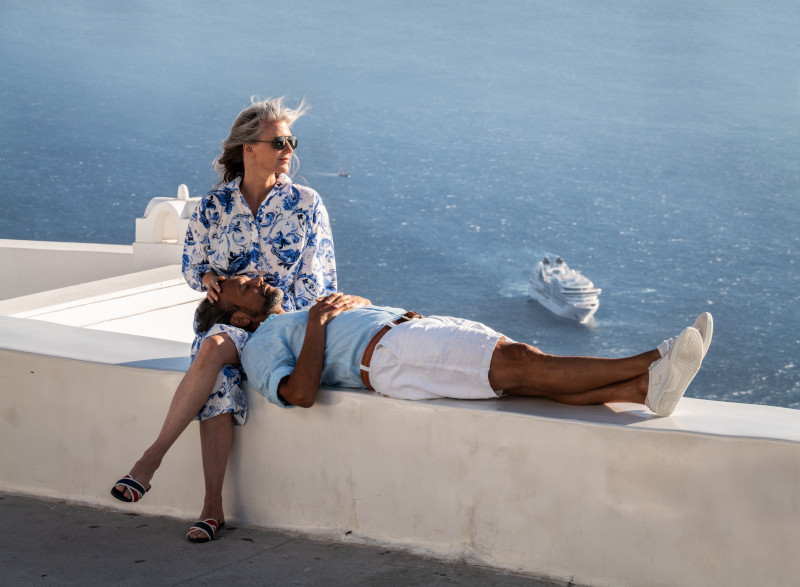 Spanning Europe and Asia, exotic Istanbul is one of the world's most fascinating cities. Domes and minarets enhance the skyline. In the old Stamboul area, traces remain of every city built since the community was established over 600 years before Christ. Once Rome's eastern capital, Istanbul was also the center of the huge Ottoman Empire. Landmarks include Hagia Sophia, once Christendom's greatest church; the Blue Mosque with its striking Iznik tiles; Topkapi Palace, containing a sultan's ransom of treasures; Chora Church with its Byzantine mosaics; and the Grand Bazaar, the ultimate shopping experience.

Limnos is an arid, volcanic island located near the mouth of the Dardenelles. The volcano and sulphurous springs on the island inspired many legends in ancient times. Limnos was the mythological home of Hephaistos (Vulcan), who was cast off Mount Olympus by his father Zeus and landed on Limnos, breaking his leg in the process. Lame ever since, the God of Fire lived on the island and toiled at his forges, the volcanoes of the island, teaching the people of the island the art of metalworking. Jason and the Argonauts stopped here during their quest for the Golden Fleece and during the Trojan War, Hercules' companion, Philoctetes was cured of a gangrenous wound by the magical earth of the island. 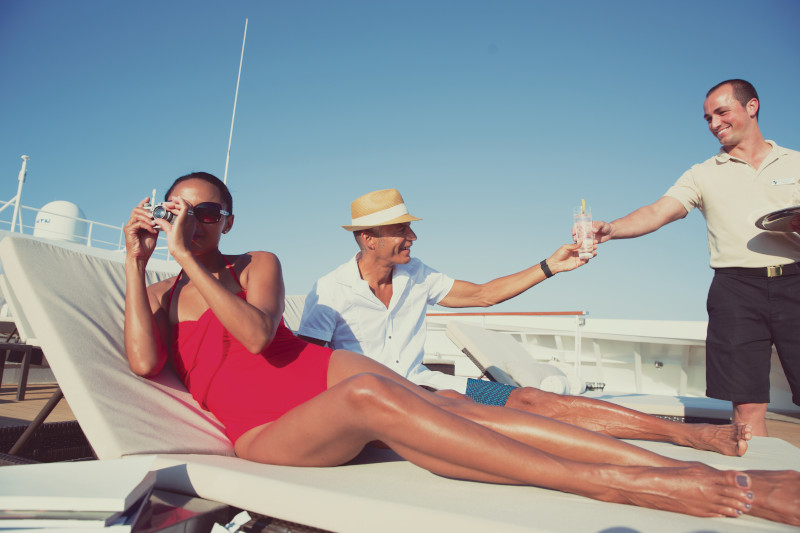 Photo: Couple by the pool

A popular holiday and resort destination, Cesme is located on a promontory on the tip of a peninsula that carries the same name. The town itself is dominated by the medieval Cesme Castle, while the back streets invite a casual stroll with their old Ottoman and Greek houses that charm passers-by. South of the castle there is an Ottoman caravanserai built in 1528 that has since been transformed into a lovely boutique hotel, and check the Greek Orthodox church of Ayios Haralambos to see the current art exhibition. Along with the historical attractions, visitors will enjoy local pleasures, such as a dip in the thermal baths followed by the culinary delights of native fruits, artisan cheeses and local wines.

Today Bodrum is a picturesque yacht harbor filled with traditional wood-varnished sailboats, charming outdoor cafes and streets bursting with small shops selling carpets, leatherwear, jewelry and local artwork. In antiquity, it was the site of ancient Halicarnassus. Under King Mausolus, the city prospered, and in death, the king left the city its most enduring legacy, his majestic tomb, from which we derive the term "mausoleum." Only its massive foundations remain today but it was the largest tomb ever built by the Greeks and one of the Seven Wonders of the Ancient World. Models on the site recreate its form for visitors. Alexander the Great attacked the city in 334 BC, leveling all but the Mausoleum, which was later destroyed by an earthquake.

When the Knights of St. John lost their castle in Smyrna in 1402, they came here. Finding the mausoleum in ruins, they used the stone to construct the Castle of St. Peter, which proudly stood sentinel to the city. Together with their fortifications on Kos and Rhodes, the Knights dominated the southeastern Aegean, running a hospital for passing pilgrims and ruling the seas as privateers in swift vessels. They remained until 1523, when Ottoman ruler, Suleyman the Magnificent, conquered Rhodes and the Knights' position became untenable. The castle still dominates the harbor and houses an archeological museum.

Best known of the Dodecanese Islands, Rhodes is a fascinating architectural patchwork of her past. Here the legacy of the ancient Greeks mingles with that of besieging Turks, crusading knights, and occupying Italians. Twin bronze deer, the symbol of Rhodes, guard the Mandraki Harbor where the 100-foot Colossus is said to have stood, a wonder of the ancient world. The medieval Crusader City is dominated by the Palace of the Grand Masters, while cobbled streets lead to the bustling bazaar and a lively harbor that is a center of the international yachting scene.

"Thira, the Wild Island" and "Kalliste, the Fairest One" - all terms of endearment for this seductive, volcanic Greek island in the Sea of Crete. Extraordinary for its black sand beaches and sheer limestone cliffs, Santorini also showcases remnants of the Phoenician, Spartan and Minoan cultures, which fell under the island's spell - an unvarying, irresistible lure that continues to this day. Fira, the picturesque, pedestrian-only capital, is reached from the seaport via a short cable car ride that offers thrilling views as you ascend. 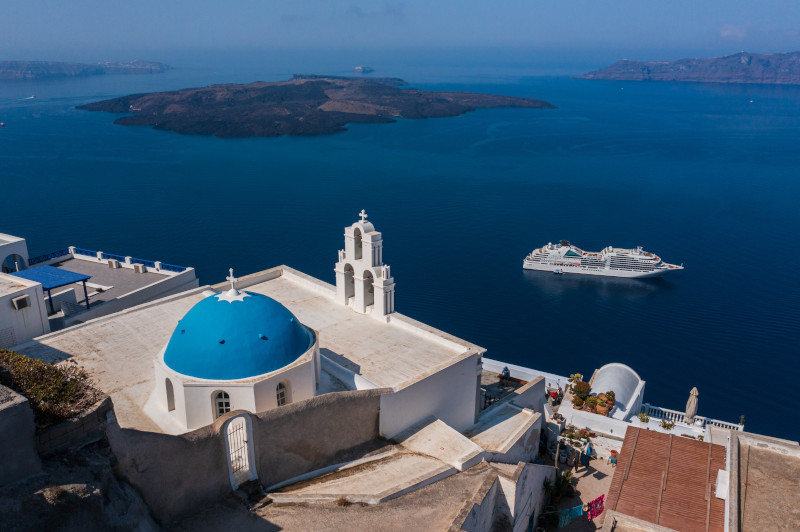 Photo: View of a Seabourn ship from a hill top in Greece

Nicknamed “The Isle of the Aromas”, Spetsai is a delight to all of the senses. The island’s historic old town is a yachtsman’s paradise, boasting a stunning harbor, quaint shops and some of the finest restaurants in the Saronic Gulf. The rest of the island is relatively unpopulated and is ringed by a single road, along which you can travel in a horse-drawn carriage. As you pass by quiet, rolling hills, be sure to pause at one of the many quiet coves along the way to refresh yourself with a dip into the cerulean waters.

Piraeus has been the port for Athens since 482 BC. The busy harbor is filled with ferries and cruise ships making their way to the Greek Islands and other Mediterranean cities. The busy metropolis of Athens and its treasure trove of antiquities lie just a few miles from the port. Even as the reality of the modern city took hold, with its high-rise apartments, crowded sidewalks and bustling traffic, the beauty of the Acropolis, the outstanding museums, charming cafés, sidewalk markets and startling views come together in a cultural mosaic for all to enjoy.

The 10% Early Bonus Savings (“Offer”) is based on promo code ZW and is only valid on select sailings booked by June 1, 2022 and departing on or after November 1, 2022. Guests must pay in full by June 1, 2022 to receive a 10% discount, which will only apply to the gross cruise-only base fare and Taxes, Fees or Port Expenses (TF&PE). Full payment means full balance of the booking (including, without limitation, any air, excursions, transfers, or hotels). Offer must be asked for specifically in order to be applied. Guests using a Future Cruise Credit and/or rebooking from voyages impacted by a pause in operations are not eligible for this Offer. Offer is subject to availability, and may be capacity controlled and may be modified or withdrawn at any time without prior notice. Discount is not valid on any optional packages including but not limited to: air, private car transfers, or pre/post packages. Offer is not valid on World and Grand Cruises or segments thereof. Other restrictions apply. Ships’ registry: Bahamas. ©2021 Seabourn.

Seabourn welcomes you to all-inclusive, luxury cruising refined to its purest form. Where hand-selected itineraries take you to places beyond the reach of larger ships.

Enquire for the offer now!

FacebookTwitterEmail
* This offer is subject to availability and can be withdrawn or varied without notice.