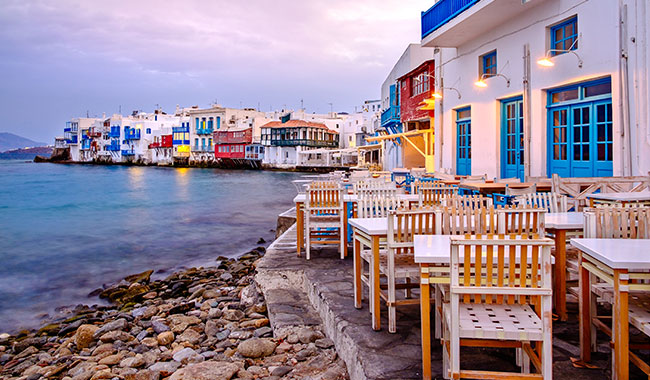 FIRST-CLASS | TAILOR-MADE: Take in Greece’s highlights as you explore the country’s ancient past and vibrant present. Tour the world-famous Acropolis in Athens, Greece’s ancient capital, before sampling the iconic nightlife of Mykonos and the rugged volcanic landscape of Santorini in the Cyclades.

This 11-day travel idea takes you to the brightest sites in Greece, passing from the capital of Athens to the famous islands of Mykonos and Santorini. 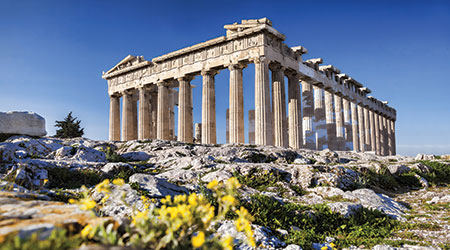 Your Greek vacation starts and ends in Athens, Greece’s capital and the centre of their ancient civilization. Athens is a landmark city, famous the world over for its wealth of history and incredible contributions to world culture. Dotted with ruins from the 5th century B.C. such as the famous Acropolis, the city is also a living and breathing museum. Take a city tour to get acquainted with the historical sites, passing from Constitution Square to the House of Parliament, past Panathenaic Stadium where the first Olympics were held in 1896 and the Temple of Zeus and finally to the Acropolis, where you’ll find the Temple of Athena Nike and the iconic Parthenon. Athens has enough history to spend a lifetime exploring, but it’s not wanting for more contemporary pleasures. You’ll find the city’s entertainment centre in Gazi, but the whole city boasts incredible food, fashion, and nightlife. This is a city that’ll never stop growing and adding more layers to its stunning depth of history.

After exploring Athens’ historical sites, turn seaward and head to Mykonos, in the Cyclades Islands in the Mediterranean. If Athens is Greece’s heart, Mykonos is its thumping heartbeat. The island is second-to-none when it comes to nightlife. Its beachside DJ parties, electric clubs, and high-end restaurant will leave you buzzing and satisfy even the most voracious partier. 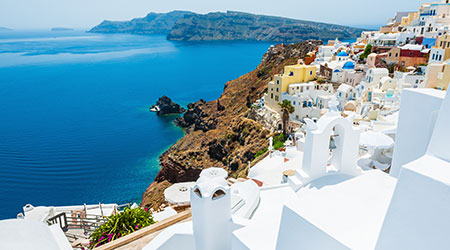 Once you've tasted Mykonos's pleasures, head to Santorini, home to the whitewashed houses you likely imagine when you think of Greece. Perched on 300m cliffs over the ocean, Santorini’s towns are spectacular and the landscape is even better. Its unique crescent shape and rugged landscape is the result of a volcanic eruption in the 16th century B.C. Take a volcanic cruise to explore the active volcanic crater on Neo Kameni and the eastern Mediterranean’s newest islets and swim through the sulphuric hot springs near Palea Kameni. Also take advantage of a Catamaran Dinner Cruise, which takes you to the ruins of Akrotiri, Santorini’s red and white beaches, and closes out your trip to Greece with a gorgeous sunset dinner on the Mediterranean.

2021: 1 - 30 Jun & 1 - 30 Sep. Price is per person based on twin/double, subject to availability and current exchange rates. Pricing reflects discount. Savings listed are the total savings based on two people (twin/double). Airline taxes, if applicable, are included. Please enquire about departures from other cities, single supplements, extensions or upgrades. Please visit trip page for full terms and conditions. CST#2070685-20. Registration as a seller of travel does not constitute approval by the State of California

Constantly evolving to keep ahead in one of the world’s most dynamic industries, Goway offers the utmost professionalism, with a personal touch.

Enquire for the offer now!

FacebookTwitterEmail
* This offer is subject to availability and can be withdrawn or varied without notice.